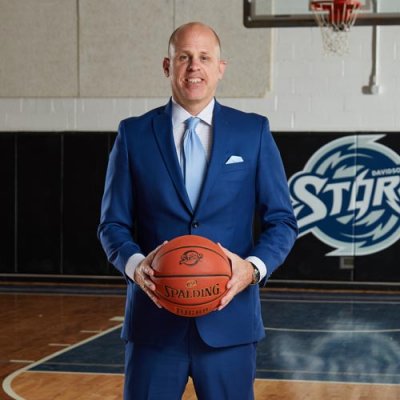 During its 15-year history, the men’s basketball program at Davidson-Davie Community College has become one of the elite junior college programs in the country. Under the leadership of Head Coach, Matt Ridge, the Storm has won 396 games in fifteen years, against just 80 losses. The 396 wins are the most wins by any National Junior College Athletic Association (NJCAA) Division II or Division III program in the nation over the fifteen-year span. His 83.1% winning percentage is also the highest winning percentage in the country during this time frame. Also, the Storm has compiled a record of 226-19 (92.2 %) at home since the start of the program in 2007.

Ridge has directed the Storm to nine outright regular-season Tarheel Conference Championships while being Co-Champions in four seasons. The Storm claimed the Region X Tournament Championship in 2010, 2011, 2017, 2020, 2021 and 2022. In seven of the fifteen seasons, the Storm has advanced to both the District VII Championships and the NJCAA National Tournament. In national tournament play, the Storm finished 8th in 2010, 4th in 2011, 5th in 2016, 7th in 2017 and 2nd in both 2021 and 2022. The Storm won the District VII Championship for the sixth time in 15 years and finished 2nd in the National Tournament during the 2020-2021 season. Unfortunately, the Storm did not get to attend the 2019-2020 NJCAA D2 National Tournament due to it being canceled because of the spread of the coronavirus (COVID-19) pandemic.

Ridge made his college head-coaching debut in 2007-2008 with the Storm following a successful stint as the boys’ basketball coach at East Davidson High School in Thomasville, N.C. He turned the Golden Eagles from a bottom dweller into one of the Central Carolina Conference’s top teams over six seasons. During 2006-2007, Ridge was the assistant men’s basketball coach at Guilford College, helping lead them to an NCAA Division III Elite Eight showing. Ridge coached the inaugural Storm team (2007-2008) to a national ranking of 9th in the nation in the NJCAA Division III rankings, a Co-Championship of the Tarheel Conference regular season and an overall record of 22-7. In the 2008-2009 season, the Storm was ranked as high as 4th in the nation with a record of 25-7 and were again regular season Co-Champions of the Tarheel Conference.

The third season, 2009–2010, saw the Storm program continue to flourish, overcoming a number of injuries to go undefeated in the conference, capturing the outright Regular Season Championship. The team won the Region X title for the first time and defeated an extremely talented Montgomery College – Germantown In the District VII title game to advance to the NJCAA National Tournament in Delhi, N.Y.

The 2010-2011 season was one for the record books. After returning only two players from the previous season, Ridge and his staff brought in a recruiting class that would help push the Storm to the top of the NJCAA polls for the first time in program history. The Storm finished with a program-high 34 wins against just 2 defeats. Davidson-Davie was ranked #1 in the national polls for 15 weeks total, and 10 weeks consecutively. After capturing the Regular Season, Region X Tournament and District Tournament Championships, the Storm returned to the NJCAA National Tournament, this time in Loch Sheldrake, N.Y. In the first round, the Storm was upset by eventual national champions Mountain View College and finished 4th in the National Tournament.

The Storm captured another outright Tarheel Conference Regular Season Championship in 2011-2012. Although ranked in the top 10 nationally throughout the season, the Storm’s journey came up a bit short in the Region X Tournament Finals against rival Sandhills. Ridge’s squad finished the season 29-3 record. The Storm finished 23-7 during the 2012-2013 season and 22-5 during the 2013-2014 season.

During the 2014-2015 season, the Storm finished 10-0 in conference play during the regular season and once again captured another outright Tarheel Conference Regular Season Championship. After being ranked in the top 10 of the national polls all season long, the Storm’s journey came up a bit short in the Region X Tournament Finals. Ridge’s squad would finish the season with an outstanding final record of 24-6 overall. The 2015-2016 season was another highly successful season for the Storm. Davidson-Davie finished as Co-Champions of the regular season, District VII champions, 5th in the National Tournament and an overall record of 30-5. The 2016-2017 season was another outstanding year for the Davidson-Davie men’s basketball program finishing with an overall record of 30-5, regular-season championship, Region X Tournament and District Tournament Championships & the Storm returned to the NJCAA National Tournament where they finished in 7th place. The Storm won another regular-season championship during the 2017-2018 season while finishing with an overall record of 22-7.

The Storm moved up and competed in the Region X D2 conference during the 2018-2019 season.  Seven different players average double figures during the 2018-2019 season and Storm finished with an overall record of 19-12. The 2019-2020 season was another incredibly successful season for the Storm. Davidson-Davie finished as Champions of the regular season, Region X Tournament/District Tournament champions, the final ranking of 3rd in the nation in the NJCAA D2 National Poll and an overall record of 31-1. In the 2020-2021 season, the Storm certainly made the record books by winning both the regular season and Region X Tournament/District Tournament and advancing to the National Championship game in Danville, Illinois.  Unfortunately, the Storm finished the 2020-2021 season as National Runner ups by losing to Des Moines Area CC 86-75 on April 24, 2021.  The Storm finished the 2020-2021 season with a final ranking of #2 in the nation and was the #1 seed for the D2 NJCAA National Tournament.

The following season (2021-2022), the Storm won both the regular season and Region X Tournament/District Tournament and advanced to the National Championship game in Danville, Illinois for the second year in a row.  The Storm finished the regular season with a final national ranking of #2 in the country.  The Davidson-Davie men’s basketball team is the only basketball team in the history of Region X to ever play in the national championship game in back-to-back years. The Storm finished with another amazing overall record of 33-3 during the 2021-2022 season.

After graduating from Ledford (NC) High School where he played varsity basketball for three years, Ridge attended the University of North Carolina at Chapel Hill and graduated in 1996 with a bachelor’s degree in secondary mathematics education. Ridge also completed his master’s degree (through the University of Phoenix) in Curriculum & Instruction in October 2012. He played two seasons on the Tar Heels’ junior varsity men’s basketball team before spending his final two seasons as the team’s student assistant coach under Phil Ford and Dave Hanners. 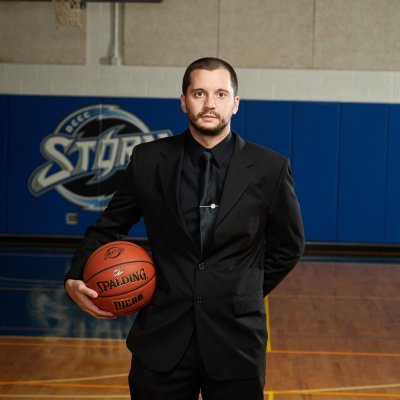 In his four years at Davidson-Davie, he has helped lead the program to the following:

Prior to joining the Storm, Coach Allen was an assistant coach at Legacy Early College in Greenville S.C. under head coach and athletic director B.J. Jackson. While at Legacy, he was the residential coach and helped the team to a 27-9 record while playing a national schedule. He began coaching on the AAU circuit in 2011 with Mid-State Magic. He coached various teams and players ranging from ages 11 to 17 before becoming the head JV coach at Northern Guilford High School in 2013-2014. While at Northern, he led the JV team to a 15-8 record and a second-place finish in the conference. He spent the following season at High Point Central High School where he was the head JV boys coach and assistant varsity coach under Patrick Battle. During his year at High Point Central, his JV boys team finished third in the conference with a 13-10 record. Coach Allen left High Point Central to attend Graduate School at West Virginia University. While at WVU he worked towards a master’s degree in athletic coaching education and was a graduate teaching assistant for the college of physical activity and sports sciences. He taught beginner and intermediate basketball activity courses along with badminton and flag football. Coach Allen also worked with the WVU men’s club basketball team in a skill/player development capacity.

After a year of graduate school at WVU, Coach Allen accepted a Job with 22ft basketball Academy in the summer of 2017. While at 22ft he was a head coach of the high school developmental team and head coach to one post-grad team while assisting with the other post-grad. Coach Allen is a 2014 Graduate of UNCG where he received a B.S. in kinesiology with an emphasis is physical education and health education. He joined the United States Marine Corps in 2007 after his graduation from Southern Alamance High School. He spent six years in the USMC and USMC Reserves.

Coach Allen is from Graham N.C.

David Tripp is a former player for Matt Ridge (2015-17) and will enter his first season as an assistant men’s basketball coach for the Storm. David has earned two full athletic scholarships since graduating from Davidson-Davie with his Associate in Arts (2017). He also obtained a Bachelor’s in Science in 2018 and a Master’s degree in Business Administration in 2021.

In Tripp’s two years at Davidson-Davie he helped the Storm go 60-10. Coach Tripp helped win regional and district titles both seasons at Davidson-Davie and made a  trip to the NJCAA D3 Elite Eight, and another to the NJCAA D3 Final Four. He averaged 11.9 points for the Storm on 56-percent shooting as a sophomore and pulled down 6.2 rebounds per game. Tripp had 17 double-digit scoring games and posted season highs of 24 points and 17 rebounds.

In 2020-2021 Tripp attended and played at Milligan University while finishing his master’s degree. He made the Appalachian Athletic Conference All-Conference first team and scored over 1000+ career points. Tripp led the Buffs with 20.9 points per game, ranking No. 4 in the AAC in scoring. He also averaged 5.6 rebounds per game and 1.5 Bpg (second-best in conference). In fact, Tripp put up big numbers in nearly every contest of the season. He scored 25 or more in six games and 17 or more in 15 of his 17 games played, with 2 game-highs of 33 points. Tripp led the Milligan buffaloes to a surprising record of 11-10 overall and a conference record of 10-8, finishing in 5th place out of 13 teams despite preseason votes predicting the buffaloes to be last place in league play in the 2020-21 year.

David played in the ECBL for the Charlotte Tribe during the 2021-2022 season averaging 22 points per game and helping the tribe earn a program-best 11-4 overall record. Tripp also was named to the ECBL all-star team (2021-22) and was invited to training camp in Indiana for the TBL before deciding to pursue college coaching.

Coach Tripp looks forward to building his coaching resume under Matt Ridge for the 2022-2023 season.