August 14, 2019 – Davidson County Community College officially welcomed its fourth president on Wednesday, August 14, with the inauguration of Dr. Darrin L. Hartness. While Hartness originally took his oath of office at the start of his presidency in January, the ceremony is meant to formally recognize the college’s new president. 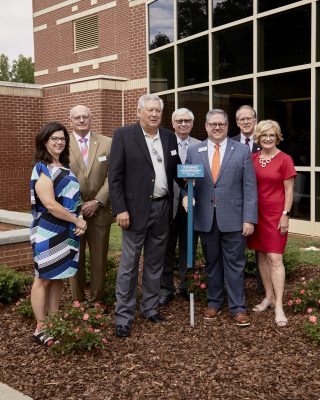 During the outdoor ceremony on the first day of classes for the new academic year, Board of Trustees Chair Kevin Firquin ceremoniously placed the chain of office bearing the seal of the college around Hartness’ neck.

Over 200 people gathered to watch the milestone event, among them students, faculty, staff, community members, elected officials and special honored guests. During his speech, Hartness paid tribute to his second-grade teacher and high school drafting teacher who inspired his passion for education.

“The power of relationships is foundational to teaching and learning,” Hartness shared with the assembled crowd. “I share these stories so you know how these relationships have changed my life and my career.”

Firquin praised Hartness’ well-known ability to work with others.

“In the first eight months of his presidency, he has daily demonstrated his effectiveness at building the partnerships and relationships that this college and her students need moving forward,” Firquin said.

Hartness also remarked on current initiatives and future plans for the college during the ceremony. These included Ignite Davie, a scholarship program using community partnerships to help Davie residents access higher education, as well as DCCC’s Day of Service that will occur November 12.

Burr Sullivan, bringing greetings from the North Carolina State Board of Community Colleges, praised DCCC for its successes and strong leadership and congratulated trustees for their selection of Hartness.

Student Government Association president Amber Sayles concluded the inauguration ceremony by declaring that the new academic year was officially in session and inviting guests to celebrate with cake and lemonade.

Following the inaugural festivities, campus leaders traveled to DCCC’s Davie Campus that afternoon for a reception in Hartness’ honor as well as to celebrate the 25th anniversary of the campus. Hartness and trustees placed an outdoor plaque in a newly-landscaped area of campus in tribute to everyone who made the 1994 opening of that campus a reality.