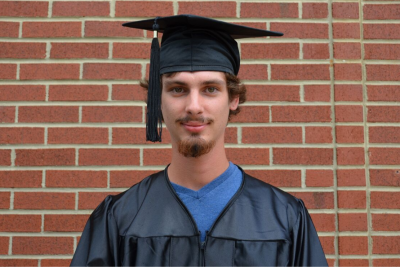 Zach Frye poses in a graduation hat and gown on the Davie campus of Davidson County Community College. Frye was the first in the state to be awarded his diploma under the new Multiple Pathways to High School Equivalency program that began June 1 of this year.

September 16, 2019 – At 17 years-old, Zach Frye learned he and his girlfriend were expecting a baby. In order to provide for his new family, he dropped out of high school and put his education on the back burner. In spite of his obstacles, however, he has reached a long-fought personal achievement.

Zach Frye can now say he is the first in the state of North Carolina to earn his diploma through the Multiple Pathways to High School Equivalency program.

“After trying so many times, it really feels good to be a graduate,” Frye said. “Between working and supporting my family, I just never could find the time to dedicate myself to finishing my diploma. I knew that I wanted to finish, but life kept getting in the way.”

Frye entered the workforce earning what he could. He attempted a few public high school programs, but without clear guidance from the programs on what courses to take, Frye would often take the same class twice, even three times. He fell into a cycle of beginning new programs, only later to learn they did not meet the necessary requirements to complete his diploma.

In 2014, Frye then enrolled in DCCC’s College and Career Readiness program on the Davie campus in Mocksville. Yet with a full work schedule and being an active parent in his son’s life, he admitted finding the motivation to continue to pursue his education and diploma was difficult.

“I would work hard full-time during the day, then come home and tuck my son into bed and was ready to sleep too,” Frye said. “My son was my biggest motivation for continuing my education, but I felt I had gotten so far behind. Every time I would come back, something else would get in the way of me not being successful.”

Then, a new program and opportunity came from the North Carolina State Board of Community Colleges.

The Multiple Pathways to High School Equivalency (MPHSE) program began on June 1 of this year at DCCC. The college was selected as one of five schools in the state to pilot the program. The program provides colleges the ability to use a combination of approved and accredited pathway elements to meet state diploma requirements. Thus, students like Zach who have already met certain credit requirements are better able to complete their diploma.

“We are so incredibly proud of Zach and his accomplishment,” Jenny Overbey, an instructor for College and Career Readiness on DCCC’s Davie campus, said. “With adults seeking their diplomas, we see situations like Zach’s more often than not. Thankfully, the program rewards students for the work they’ve already completed. It was that acknowledgement of his past work that helped Zach reach this milestone, even with his other responsibilities still present.”

Overbey first reached out to Frye in May 2019 just before the program was launched. After working through his previous courses and program requirements, they discovered he was only two credits short. In a little under a month, Frye completed his necessary tests.

As of the beginning of July, Zach Frye was officially a high school graduate with his diploma after five years of barriers, obstacles and hardships.

“This isn’t an end point,” Frye said. “My diploma is just the beginning. I want to continue my education and take that next step. As a kid, I always wanted to be a pilot. My goal now is to earn my degree and become an aviation mechanic.”

Diploma in hand, Frye is eligible for a raise at his work. He also now has the ability to continue his education to better support himself and his family.

“This diploma will now take me to different places, and I’m so grateful to have the opportunity to officially graduate,” Frye said.

Those interested in learning more about the MPHSE program and earning their diploma can reach DCCC’s College and Career Readiness Program Director Lisa Kraft at Lisa_Kraft@davidsondavie.edu or online at DavidsonCCC.edu/CCR.