Before their victory in the Region 10 DII tournament, the Storm finished their regular season with a 28-1 record overall. This record also ranked them third in the NJCAA Division II national poll, as well as an automatic bid to the now-cancelled NJCAA DII national championship. 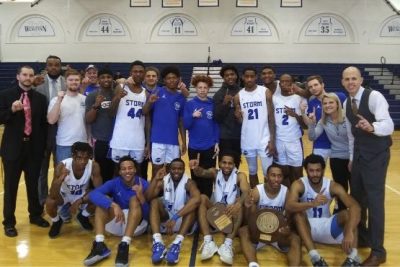 The DCCC Storm men’s basketball team poses after their final Region 10 tournament win against Louisburg College. The team traveled to NC Wesleyan College in Rocky Mount from March 5-7 to play and ultimately win in the tournament.

“This team has had an incredible chemistry both on and off the court,” Storm men’s basketball coach Matt Ridge said. “You can see just how well they play together, and how consistent they are with their performance. Our players play hard, smart and together to wear down our competitors.”

Despite the awards and victories, both team members and coaching staff remarked on the unity and cohesion that has carried them through 31 games thus far leading into the regional tournament win.

“Looking where we began in August, we’ve grown so much on and off the court,” Hairston said. “The wins have been incredible, but the body of work that has gone into this season is a beautiful thing. We’re a smart, close-knit group eager to learn and execute our strategy with the will to put in the hard work to see it happen.”

This season’s team has added upon an already strong legacy. In addition to their victories on the court, all four of the Storm’s sophomore players have received multiple offers to play basketball at various four-year institutions.

The team was formerly set to attend the national tournament in Danville, Illinois, from March 17-21. It would have brought together a total of 16 teams from across the nation. The NCJAA decided March 16 to cancel all basketball championships due to the coronavirus (COVID-19) outbreak.

“This is only our second year in Division II, and how far we’ve come speaks volumes of this team’s chemistry and togetherness both on and off the court,” Hairston said.