Ford, who got his start as a Tarheel and later was an assistant coach alongside Dean Smith, played in the NBA and on the 1976 U.S. Olympic Team that brought home a gold medal. He will offer remarks and help inaugurate the first two athletes into the STORM Hall of Fame. 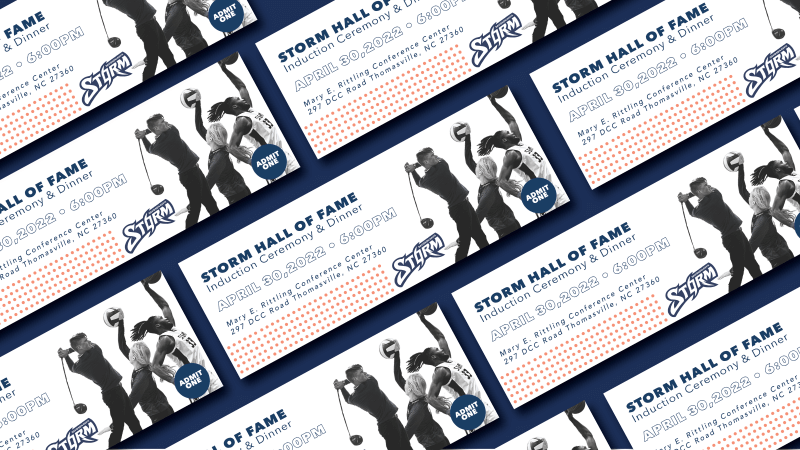 “We are thrilled to announce that Justin Strickland and Justin Glover, two of our STORM basketball alumni who have gone on to great success and deep community involvement, will be the first inductees into the STORM Athletics Hall of Fame,” announced Matt Ridge, athletics director and head men’s basketball coach at Davidson-Davie.

Justin Strickland played on the inaugural 2007-2008 STORM basketball team at Davidson-Davie, which went 22-7 and was ranked as high as ninth in the country after having only six weeks to build the new team. Strickland averaged 34.1 points per game and led the nation in scoring in all divisions in NJCAA and NCAA during the 2007-2008 season. He scored a remarkable 954 points in his one season with the STORM while averaging 6.3 rebounds and 4.7 assists per game. He shot 58% from the field, 42.7% from the three-point line, and 86% from the free-throw line. Strickland was an academic All-American, took 21 credit hours in one semester, worked a full-time job, and was named a First Team All-American while at Davidson-Davie. Today, with the success of Strickland Brothers 10 Minute Oil Change, Strickland’s generous support of local organizations has included the STORM, resulting in the unveiling of “Justin Strickland Court” in Brinkley Gym in 2021.

Justin Glover played at Davidson-Davie in 2009-2010 and 2010-2011, leading the STORM to regular-season championships, two regional championships, two district championships, and two national tournaments. He was named to the Third Team All-American as a freshman and First Team All-American as a sophomore. Glover also was named conference player of the year. He scored 1,285 points in two years, the most ever by a Davidson-Davie player. He transferred to Winston-Salem State University on a full scholarship for the 2011-2012 and 2012-2013 seasons. Glover led the Rams to two CIAA championships and two national tournaments and was named the CIAA MVP in 2021 and First Team All-BAAD in 2013, a prestigious award within historically black colleges and universities. He was also selected to the First Team All-State College Division in both 2012 and 2013. Glover played professionally for NBA G-League Delaware 87ers, now the Delaware Blue Coats, and currently runs a youth sports program and AAU basketball organization.

Davidson-Davie Community College (DavidsonDavie.edu), which incorporated Davie County into its name in 2021, is a fully accredited, multi-campus college where students of all ages and backgrounds pursue academic and career-focused education in order to build successful futures. As one of 58 institutions within the North Carolina Community College System, Davidson-Davie offers 125 pathways in over 40 career fields, as well as affordable college-credit coursework to students who plan to transfer to four-year schools. With a mission to serve the changing needs of students competing in a global environment, Davidson-Davie is committed to quality education, innovative and equitable learning experiences, training, and support across a wide range of 21st-century career fields.