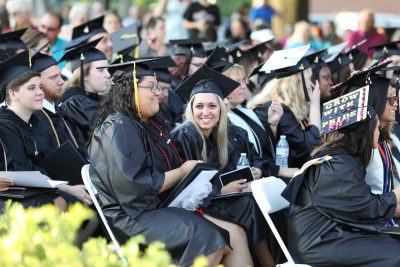 Graduates eagerly await to turn their tassels during the 56th DCCC commencement ceremony. The graduating class of 2019 was comprised of 594 associate degrees, 193 diplomas and 1,102 certificates.

May 10, 2019 – Weather concerns couldn’t put a damper on Davidson County Community College’s 56th commencement for the Class of 2019. With storms in the forecast for the originally planned Saturday ceremony, commencement was rescheduled for Friday, May 10, at 6 p.m.

Following a call to order and welcome, DCCC President Dr. Darrin Hartness gave remarks to over 300 members of the 2019 graduating class as well as the thousands of family, friends, community members and special guests.

“Graduates, I know you’re excited today, but let me tell you, I think I’m just as excited,” Hartness said, during his first commencement since assuming the DCCC’s presidency in January. “If you take nothing else from what I say, remember this: you’ve accomplished so much, and today we celebrate that. And I believe – just as these faculty, staff, family, and friends believe – that you can do it.”

Ken White, DCCC’s Board of Trustees chair, then took the stage to give special recognition to George Fouts. Fouts received an honorary degree for his service to the college, as well as his dedication to higher education in the community, state and nation.

Fouts is the ninth individual in the history of the college to receive this honor.

The ceremony then turned to recognizing student awards presented by Kevin Firquin, vice chair of the Board of Trustees. This year’s Academic Excellence Award, a state-level award that celebrates academic achievements of students in North Carolina Community Colleges, went to Alisha Sechrest.

Sechrest received her Associate in Applied Science in Nursing.

“She credits the RIBN joint nursing program with DCCC and NC A&T as setting her on the path to success,” Firquin said. “[Alisha] is quick to point out that success has only come by working outside her comfort zone, trying again after she has failed, making the most of every situation and having a determined attitude and compassionate heart.”

Seven additional students received graduation scholarships for their academic and personal achievements while at DCCC. These scholarships are designed to support students upon completion of their degrees and in preparation for the next stages of their lives.

Hartness then proceeded to confer the degrees, diplomas and certificates for a total of 1,331 graduates.

DCCC graduate and student government association president Ozzie Martin, who received his Associate in Science degree, closed the ceremony with these final words.

“Whether you leave here to become a paramedic, police officer, nurse, truck driver, or to further your education at a four-year school, one thing can be said for all of you, and that is: the future generation has their eyes on you, you’re all integral parts of your communities, you’re role models and you’re inspiring someone. I hope you don’t forget that,” Martin said.